October 18 Side by Side 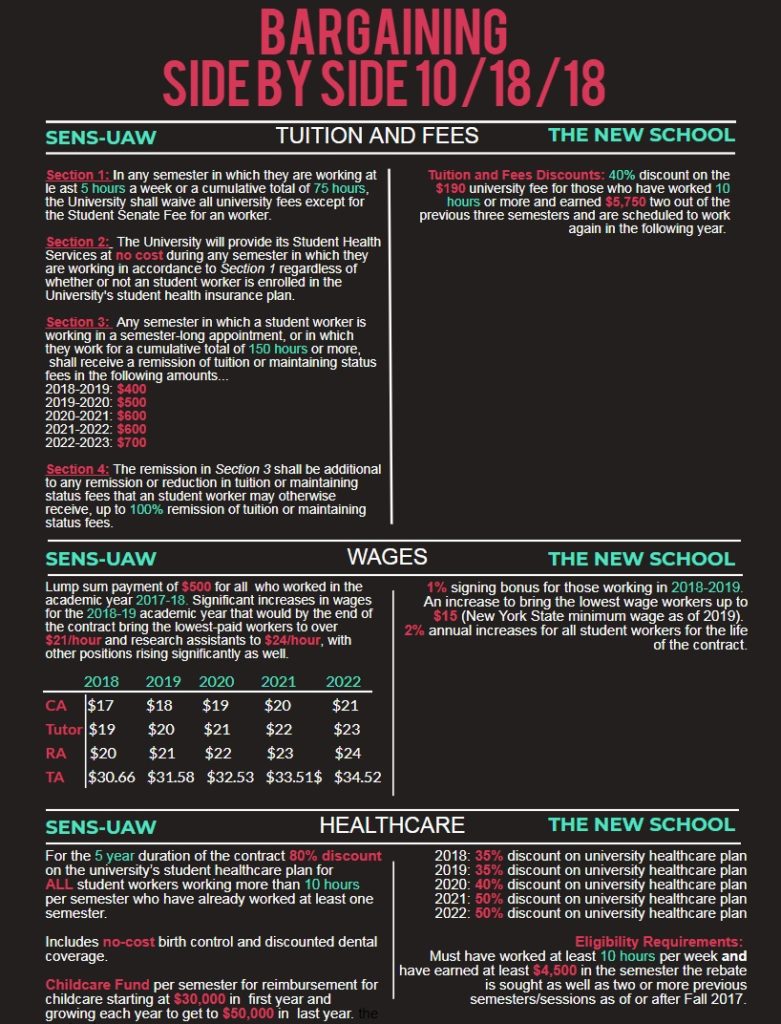 An election for the SENS-UAW Bargaining Committee vacancies (5 positions) will take place on:

Read about the nominated candidates below:

I am a second-year Master’s student in the Public and Urban Policy program at the Milano School. This Fall I am working on campus as both an RA at the Center for New York City Affairs and a TA for an introductory economics class.

I got involved in organizing with SENS-UAW last Spring in the lead-up to the strike, in which I was an active participant. I have attended Organizing Committee meetings throughout the summer, helping with the bargaining survey and with planning for getting a strong start to our organizing this Fall.

As a member of the bargaining committee, I would strive to be a voice at the table for the Milano School, which has faced particular challenges with things like lower pay rates and late pay. I would also draw on my experience as a Master’s student to speak to the particular challenges encountered by those of us who are only here at The New School for a couple of years.

I recognize that bargaining committee membership represents an important leadership role both in bargaining and when it comes to keeping the membership informed, engaged, and ready to act in support of the bargaining efforts. As a member of the committee, I would work hard both at the table and in our organizing to build our power so that we can win the strongest possible contract.

I’m a PhD student in Sociology working as a Teaching Fellow and Research Assistant, and I would like to serve as a bargaining committee member. I’ve been active with SENS-UAW since our initial card drive in fall 2014. I was present to file our petition at the NLRB, testified about our working conditions at the labor board hearings, and was active in the unionization vote in spring 2017 as well as our strike last May. As a long-time SENS organizer who has worked in several unit and non-unit positions in Lang, NSPE, Parsons, and NSSR, I hope to bring my institutional knowledge and experience of both the university and the union to the bargaining table to win us the strongest contract possible. Our union is only as strong as our members who are willing to fight, and I aim to do everything I can to make our union more inclusive, communicative, and responsive to member concerns.

The strike helped increase our visibility across the university, and I believe a diversity of communication tactics can build on this mobilization to keep members and allies from all divisions informed and engaged. Getting the university to move on economic issues will only happen with the active participation of the unit. We must protect our right to withhold our labor until we have health insurance and tuition and fee remission for more than the highest paid employees. If elected, I will do everything I can to share information between the table and the unit, keep the pressure up through creative mobilizations, and make sure our contract will benefit all unit workers.

My name is Kenny Dillon, I’m a first year Historical Studies MA student. While evidently I’m a greenhorn in terms of organizing at The New School, I think that if the membership is interested in maintaining organizational consistency in the long term then electing newcomers like myself to the bargaining unit is a step in the right direction.

As an undergraduate I founded the first student union at my university which fought the administration on a proposed plan to cut nearly two dozen academic programs (and won). We specialized in demonstrations, letter writing campaigns, public and media relations, countering/correcting university updates, public petitioning, and building solidarity with

existing unions and organizations on campus. Our underground newspaper was a big hit too :). These were initiatives I had no prior experience with but figured out along the way on a ‘need-to-succeed’ basis—with a creative tenacity I’d like to continue employing as a bargaining unit member.

Professionally I’ve built some relevant experience to this position as well: as a journalist, political public relations consultant, and issue-based campaign organizer. Personally I’m…quite…interested in being paid fairly for my work as a research assistant and ensuring that our rights as an eclectic and diverse workforce are strengthened and respected. I’m looking forward to learning from the experienced members of the team and supporting a necessary and righteous union. Solidarity!

I am a doctoral student in Politics with a specialization in History. I hold both union and non-union positions across the NSSR and Milano. As a long-time student and worker at the New School, I have a good understanding of the problems and obstacles that the academic workers have to face on a daily basis. I am also well acquainted with the extra hardship that the international student workers endure.

My prolonged experience at the TNS allowed me to witness the movement for our union to emerge, evolve and gain momentum. In addition to my familiarity with the academic workers’ struggles, I also hope to contribute with the skills I have acquired over time as a political activist and organizer in various platforms.

If elected I will work towards a fair contract that hopefully will be the first step in the creation of an academic and work environment where student workers are recognized for the invaluable services they provide. I will join other members of the unit in our fight for fair pay and rules of employment as well as comprehensive benefits.

My name is Kevin Rice and I intend to run for a position on the SENS-UAW Bargaining Committee. I am a Psychology MA student who has held multiple RA positions at the NSSR, and have been actively involved with the SENS-UAW since the Fall of 2017 as member of the Organizing Committee. Over the course of my union membership I have been deeply involved with SENS-UAW’s outreach campaigns amongst the membership, where I have gotten a unique insight into the diverse and profound issues many of our fellow working colleagues have faced, and currently face, under a disinterested administration. That is why it is my goal to seek the strongest contract we can achieve!

I will fight for late pay protections, childcare, health care, a living and competitive wage, independent sexual harassment and discrimination protections, as well as the multitude of other boiler plate rights any employee outside of the university system might expect, but as to date have been denied to us as student workers at the New School. I will also strive for transparency and democratic protocol in the decision making of the Bargain Committee in its negotiations with the Administration, with an in interest in establishing information dissemination procedures that will facilitate timely awareness and input by the membership. This includes decision making pertinent to the potential for having to go on STRIKE, as well as continuing to STRIKE, if the administration continues to disingenuously negotiate on our economic demands.

I am a second-year MFA Transdisciplinary Design student at Parson School of Design. As an international graduate student I am facing the dilemma of paying tuition and not being allowed to work off campus. Last year I worked in multiple jobs as a teaching assistant at the School of Public Engagement and as a research assistant at Parsons to be able to sustain my studies at The New School. It simply was exhausting.  We need a union which fights for pay increases for all student workers, ensures excellent healthcare coverage, and supports the needs of international student workers and student workers with families.

At the end of last semester I got involved in organizing at my program and the overall department as the union was heading towards the strike. During undergraduate education in Germany I was a very active Member of the Student Parliament, as well as the General Students‘ Committee. I have experienced how much power students actually have as we went through the process of unionizing. It is important to me to continue this work to get an international perspective and gain practice organizing in a different system, one without free education.

I want to use this position on the bargaining committee to be both a voice for parsons students and all graduate student workers across The New School, who make this university function.

You may have seen the letter being circulated, which demands that President David Van Zandt, the administration, and University Board of Directors urgently address the calls for The New School to declare itself a Sanctuary Campus, and take concordant action.

Sanctuary demands are critical, but it has already been more than a week since the executive orders have created havoc for those who call, or hope to call, New York City and The New School, home.

Recognizing the imperative of action, the UAW is generously offering concrete support to those in our community affected by these new border restrictions.

Upon hearing that the New School has not made free legal counsel available to those affected or potentially affected by Trump’s executive orders and travel ban, Legal Services Staff Association (UAW 2320), have offered to serve in that capacity.

Students don’t need to be currently working to benefit from this counsel. If you need legal advice, or have unanswered questions, you may call Beth Baltimore, with the Legal Services Staff Association. Please email us at sensuaw@gmail.com and we’ll pass on her phone number.

Our union — Student Employees at the New School (SENS-UAW) — has been fighting to be recognized by the New School Administration for more than two years. Throughout this battle SENS has been supported by the resources of the United Auto Workers — the labor union we (like academic workers at NYU, Columbia, and at schools all over the nation) chose to join.

We extend our heartfelt thanks to the UAW, to the Legal Services Staff Association, and especially to Beth Baltimore for the aid they have made available in this time of crisis.

Courage and solidarity together!